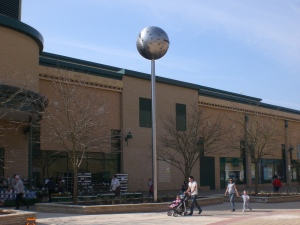 We installed a former landmark to the centre of Basildon.

After a five year absence we have restored a former landmark to Basildon Town Centre at its new home in St Martin’s Square.

The clock was first removed from its old home, in High Pavement, near Marks & Spencer, about five years ago, to make way for the town’s new lift.

But it was returned yesterday morning and now stands where the Woodsman Poacher sculpture was situated, until recently.

Basildon Council leader Tony Ball is pleased with the newly-repaired clock, which he believes is a worthy and suitable replacement.

He said: “The clock is one of the original iconic structures in the new town.

“I remember someone used to play the accordion beneath it every Saturday, which people who lived in Basildon in the Sixties and Seventies might remember.

“I’m glad it’s back and working. For too many years it was an embarrassment that told different times on all four faces, and I always wanted to make sure the clock was restored.

The clock cost around £9,000 to repair. It was installed by us for £6,500. Its restoration was funded by the Government’s Homes and Communities Agency.