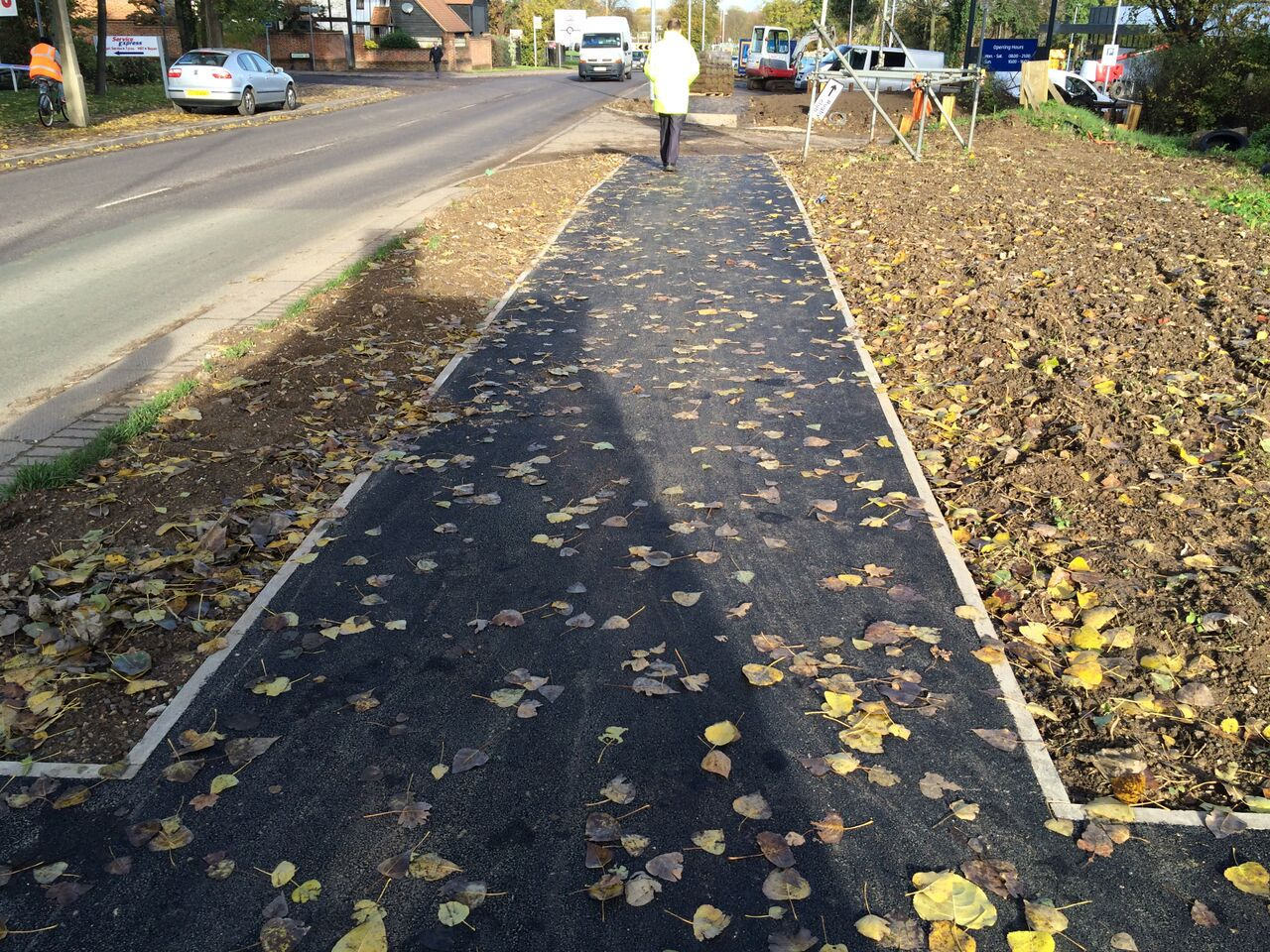 SB Civil Engineering contractors were awarded this contract as they were both a Herts Highways and Thames Water approved contractor. The proposed new S278 footpath line and level was set out by one of our highway engineers. From the excavation of the grass verge area spoil will be loaded and transported to a designated place of tipping ready for collection. A highways compliant Type 1 blinding layer was spread and compacted to protect the formation level at the end of each shift.

On completion of excavation PCC path edgings were laid, as per the S278 drawing, to line and level on a bed of ST1 concrete. MOT Type 1 was tipped in the highways site compound and transported to S278 site. The Type 1 was spread and compacted to the required depth ready to receive the Herts County Councill Highways specified macadam surfacing.

New highway kerbs were installed on the same line to the new required levels creating the new crossing points. Blister paving will be laid to line and level on a bed of ST1 concrete. On completion of all PCC path edgings, kerbing and blister paving the new footway received the Herts Highways specified asphalt surfacing. The new surfacing was hand laid and compacted using a twin drum roller. Screened top soil was transported to site and spread along the edges of the new footpath.

All section 278 works conformed to the construction issue drawing prevalent at time of construction and sectional completion forms were signed as acceptable by a representative of Herts Highways prior to removal of Traffic Management and signage.

The new Herts Highways compliant pots were placed on a concrete bed and received a concrete surround. The level of the new highway gully pots allowed for two courses of class B engineering brick work before the gully grate and frame was laid. The connection was into the existing Thames Water surface water sewer. The existing asphalt was broken out.

The two highway gully pots were connected via a Y junction and one single connection was made to the Thames Water sewer. Timber frames and standard lap sheets were used to excavate to the Thames Water sewer at a depth of 2.5 meters. The connection was made using a preformed junction and came up at a steep angle to negate the need for deep excavation to the gully pots. On completion of the connection the trench wasbackfilled with MOT Type 1 and compacted in 200mm layers using an upright trench compactor.